Would you use CalculiX for commercial work?

I’d love to hear your opinions on why/why not.

Many people (including large companies) do it but it depends on what you need. CalculiX has many features and very intuitive syntax (especially for those who know Abaqus) but it has some bugs and limitations (especially regarding shells and beams but also nonlinear buckling or explicit analyses).

That begs the question then: When would you NOT use it?

When some of the aforementioned (or other) limitations make it hard or impossible to use CalculiX for particular purpose.

I use as my main solver, but using Mecway as preprocessor, and in the very few times that I need beams elements or some complex shells I can use the internal Mecway solver. We build medium size gas compressors for oil ang gas industrie. I use it in the same way as freelance consultor.

Yes, and we do. Using Calculix coupled with Mecway has allowed us to put FEA on many desks, as commonplace as Excel vs. having a small set of licenses for an elite group. Some highly non-linear systems are probably more trouble in CCX than ANSYS, but not enough to alter our strategy. 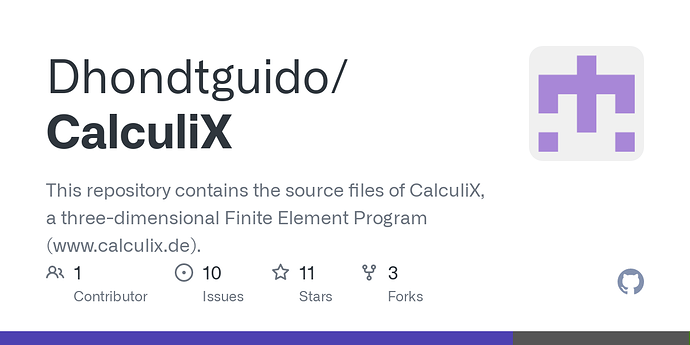 What companies do you know of that use it?

Within the first paragraph on http://calculix.de/ there is a large company mentioned. And below that there is a list of professional users.

For me and may the others too, using two FE solver inside one GUI only raised to doubt and confusion.

even FE is a general purpose, still one of them are slightly different betwen each others. In solid element, small deformation and elastic material they both solver should give identical or exactly the same results. But it’s not similar in case of nonlinearity, did the load follower in large deformation? Are both solver have similar capabilities in nonlinear material type? etc

In beam element, even for classical formulation being used still there may have different workflow. An example of simple supported beam, common FE required the beam to be meshed but another is not. Only one element is done to get maximum moment and deflection at midspans. Some are account rigid zone offset at beam column intersection, another is not.

It’s not easy to trace any discrepancy occurs when someone switch the FE solver. It seems better to be separated rather than mixed in a single GUI due to not all have similarity.

We primarily use the CCX solver, and we have a lot of history of validation with the work we do. We don’t make use of beam/shell elements very often. In the end, I think your choice has to be based on your own needs.

We don’t make use of beam/shell elements very often

CalculiX is at best in working with solid element since all analysis type become supported. also, the reasons all common 1D and 2D element being expanded to solid for uniformity,

i’m personally still interesting in CalculiX unique feature of expanded element due to it advances and challenging.

regarding confusions of mixed a solver inside one interfaces, maybe it’s a problems for general user also. for examples switching between solver CalculiX, Code_Aster and/or OOFEM in a single interfaces. did all the solver have similarity and capabilities? that’s what i mean, need to be separated not mixed ones.