i do some test of deep slender beam (steel), the webs is thin and subjected to shear due to patch loads. using elastic material, large deformation and contact analysis is solvable for both full model and half symmetry, deformation result modes shown as expected and captured well to experimental.

however, it’s divergences when using nonlinear material applied. i seen from the stress elastic distribution has yield about 5 to 15 times higher, massively in large area of webs.

any hints about the problems? thanks in advances. 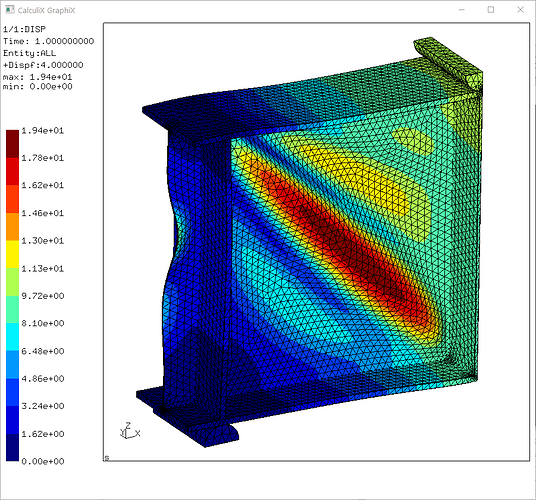 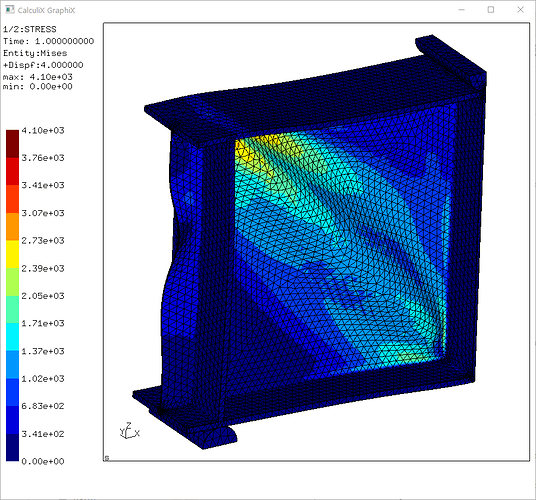 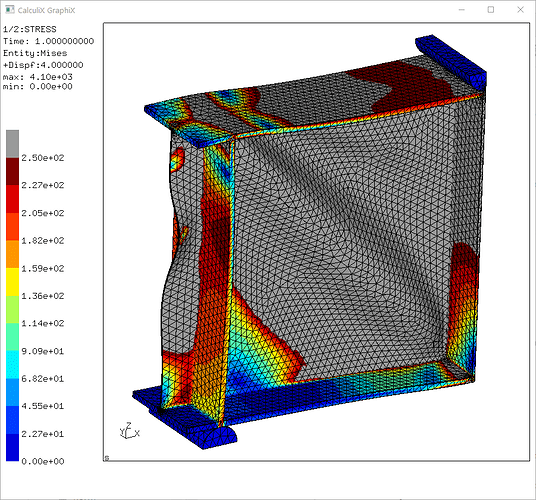 Do you mean that there’s no convergence in these cases with large plastic strains? Maybe adjusting the plasticity model could help. Or refining the mesh in critical regions. I would also try with different types of elements - the choice of element type can be particularly important in analyses involving plasticity in CalculiX.

Do you mean that there’s no convergence in these cases with large plastic strains?

right, as i described.

Or refining the mesh in critical regions.

the original FE models from the report of authors does not taken refinement.

I would also try with different types of elements

but, still in doubt and questionable if all it be can help to solvable due to membrane behavior of structural beams.

may the cause of solver algorithm between Newton-Raphson and modified Riks?

I think that it’s a good idea and I would try this.

may the cause of solver algorithm between Newton-Raphson and modified Riks?

If the original author used Riks solver and this problem involves large instabilities then it’s very likely that ccx’s traditional NR algorithm can’t handle them. The lack of an arc length solver is one of the most significant disadvantages of CalculiX.

that’s another problems, the author not to mention the algorithm selected in Abaqus 6.11.

the element type being used by the authors are shell (S4R) and the material is simple bilinear elastoplastic with strain hardening.

sorry. probably not now, i’m on the way making of test and benchmark and did not yet published since it’s unfinished.

here i’m seeking an advice and hints from someone who has experienced similar problems.

You could try reducing the step size. The plastic models I have run so far were very sensitive to a too large step size.

thanks, i forgot about this and i’ll try.